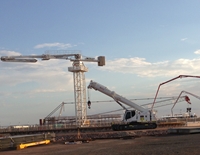 Laing O’Rourke was awarded the contract to build four large Cryogenic LNG Tanks as part of the $34B Ichthy’s LNG Project in Darwin, Northern Territory. With the largest of tanks spanning 90 metres in diameter and 40 metres in height, the slipform construction method required a placing boom to be centred in the tank and capable of reaching the full circumference of the tank at maximum height.

Packaged up with a Putzmeister BSA2109 High Pressure Trailer Pump and all the necessary pipelines and equipment, they are now set to get the job done. We look forward to sharing photos of the progress in the months to come.