Queensland Curtis LNG (QCLNG) was the world’s first project to turn coal seam gas into liquefied natural gas (LNG) and one of Australia’s largest capital infrastructure projects. Comprising gas fields and production in the Surat Basin with 540km of pipeline to Gladstone and an LNG plant on Curtis Island, the project involved more than $20 billion capital infrastructure investment.

For the project, Bechtel Australia PTY LTD was chosen as the general contractor and purchased the Putzmeister placing systems, with Meales Concrete Pumping supplying the Putzmeister truck-mounted concrete pumping equipment and high pressure trailer pumps. Meales Concrete Pumping was the sole provider of concrete pumping services for the two LNG production units (known as trains) for the project. Approximately 130,000m3 of concrete was poured over a two-year period with two 47m and one 40m boom pump situated on site for the duration, and additional equipment supplied to meet peak demands.

One of the more challenging aspects of the QCLNG project was its island location, which meant all equipment, supplies, and workers needed to be transported across the harbor from Gladstone, Queensland.

Because of a congested work site and since most of these areas are not accessible by land, building the marine facilities was a challenge, as much of the work had to be performed from barges located in the water. The Putzmeister BSF36 was especially useful for this part of the project due to its small footprint.

To build the two massive LNG production units, two Putzmeister BSF47 Truck-Mounted Concrete Pumps worked to place the majority of the 90,000m3 of concrete for the footings, mat pours, pedestals, and columns. For pours of this size, to primarily only use two pumps shows the confidence Bechtel had in Meales and their Putzmeister equipment. The Putzmeister BSF36 was used to assist with the placement of large mat pours, and for smaller miscellaneous pours.

The Putzmeister truck-mounted concrete boom pumps were selected because they not only allowed Meales to reach the designed heights and complete the large pours efficiently, but they allowed for fast, easy movement around the site, which was essential, with machines being set up in three to four different locations on any given day.

Putzmeister equipment was also used to build two massive storage tanks for the plant. To build the 90 metre wide by 40 metre high tanks, both placing booms and truck-mounted boom pumps were used, with approximately 15,000 m3 of concrete placed for each tank.

Six MX 43/47Z-Meter placing booms, three surrounding each tank structure, were mounted on 40 metre high freestanding lattice tower sections. Each had two ties back to the tank to help support the free stand height. The systems utilised three BSA 2109 HD stationary concrete pumps. Since the MX 43/47Z is the industry's largest placing boom that does not require a counterweight, it helped to significantly reduce congestion onsite.

The placing booms were primarily responsible for placing concrete for the walls, and roof of the tank structures. On the lower sections of the tank walls, which are thicker than the top portions, and therefore require more concrete placement, the 47Zs were used to help supplement the pours. The truck-mounted pumps allowed the pours to be finished in a shorter period of time than if just the three placing booms were being used, enabling the team to better meet its deadlines, which is of course vital to any construction project.

The project was completed in 2014, and has proven a great success, providing cleaner hydrocarbon energy for export markets, whilst creating thousands of jobs and boosting the local economy. 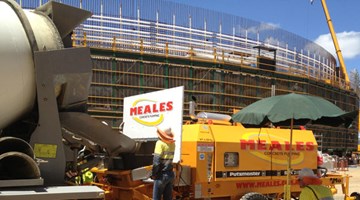 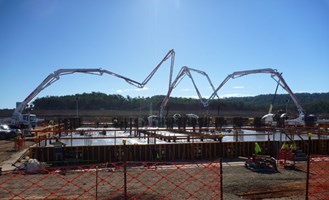 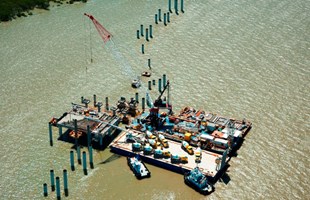 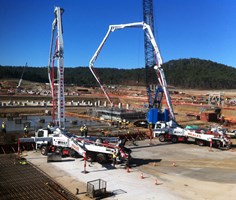